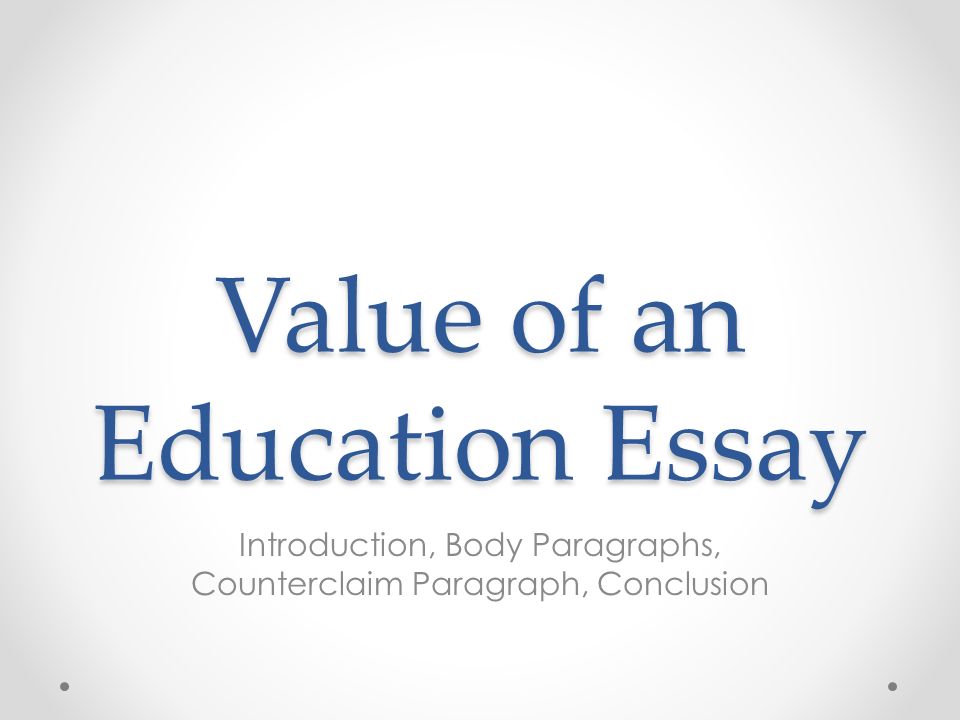 Essay on Value of Education

Essay On Value of Education – TITLE

The definition of “Educational Value” In The Economics of Education

Essay On Value of Education – INTRODUCTION

The term educational “value” implies that someone or something acquires “Value” while passing through the educational course. It may be in the form of boosting human capital, social capital or earnings, but this value must have an optimistic financial yield in order to be worth investing in.

This may seem palpable in modern world of the information age but it was not the case applicable to all times. Though it is not easy to clearly define and quantify the value of education!

Essay On Value of Education – BODY

In the early 1900s education was considered firmly as a consumer durable. That is, most of the people acquired an education just for their personal satisfaction or enjoyment and intellectual pursuits over their lifetime.

One could not find an essential correlation between acquiring more education and higher earning capability due to increased productivity, or higher social value due to progressing society as a whole.

It was until 1950s that emerged as an era when more industrial perception was shaped in to view to help comprehend the phenomenon of improving the economic performance of the nation by investing in citizens through education.

This came as a critical concept in the competition between the US and the USSR.

The U.S. started investing in education in 1950 which included a huge expansion of the secondary education and the GI Bill.

Due to all that they had to justify the new policies and there was a necessity for elaborating the human capital in an effort to formally assess the true value of educational investments.

The educational investment has been made to grow to over 6% of GNP in many countries over the last 50 years.

Educational must return some sort of financial gains in order for it to have any value outside of being simply a consumer durable.

On an individual basis, does a person acquire value from an education?  It is evidently shown in statistics that people that complete higher levels of education tend to earn higher salaries than people that have only completed secondary school.

While it is arguable whether the investment in higher degrees for individuals is worth the total costs (income forgone, tuition), it is not arguable that a person has augmented their individual financial productivity.

On macro scale of Primary vs. Secondary vs. University vs. Graduate this theory seems very clear and it may have less steady dynamics at more micro standards. For e.g. it could be very conceivable for MBAs to earn more as compare to those have completed PhDs.

As far as the business’s perception is concerned we have to analyze whether businesses acquire value from the education workers or not.

There are many “productivity studies” that have been done on workers and the survey proves that educated workers are more productive then illiterate ones even in a type of business where literacy doesn’t seem critical for the completion of task.

This trend can be well explained by the fact that going through the process of learning to read and write builds the ability to solve one’s problem through better communication and efficient training to other workers.

As far the business’s perception is concerned, we have to analyze whether businesses acquire value from educated workers or not. There are many “productivity studies” that have been done on workers producing simple commodities like “wheat” where the literacy was not that critical to complete the tasks.

This trend is explained by the fact that going through the process of learning to read and write builds the ability in the workers solves their problems effectively through better communication.

This increases more efficiency in them since they can help educate and train other workers to be more efficient. Businesses also emphasize on giving more value to the educated personals rather than less educated ones because they have been willing to pay them their worth over a long period of time.

The last category we will make our analysis on is the value of education in the society. Does educating citizens increase societal productivity? There is one major area where this clearly holds true is that it is essential for democracies to have literate citizens base in order to function properly.

The more the people are literate, the better they can make a decision for an election of a candidate with the greatest likelihood of success. In several ways education is required in democratic countries for self-preservation and advancement as a whole.

A part from value of Human Capital, the social capital’s theory plays a very important role in capitalizing the value of education. As stated in professor Carnoy’s module, “the formation of human capital may depend greatly on social relations in the family, community and the nation as a whole”.

The example we can relate to this is that a child whose parents have high human capital (i.e. highly educated) will not benefit much from schooling unless his/her parents invest their social capital to help their child push through the school an in turn increase the human capital of their child.

Essay On Value of Education – CONCLUSION

The challenge may come while quantifying the direct impact and value of many investments in education specifically due to its long incubation period. I think it is very clear that an educated public produces important value on many levels.

Individuals benefit by increased earnings & high living standard, businesses gain by being able to improve productivity, and society gains by having a stronger level of civil contribution.

To give us your feedback or get more related article please feel free to contact us!